The first chick, one of the Laced Blue Bells, hatched about 3:00 a.m., June 28th, and announced her arrival vociferously.  The cheeping was So Loud, it woke me up!  I got Oscar (eldest grandson) and Emmett (youngest grandson) out of bed to ooh and aww over her.  Oscar declared her name is Eager.  We all went back to bed.

The cheeping, however, did not stop.  I finally had to turn off the kitchen night light so she would shut up and we could go back to sleep.

6:00 am, when the second Blue Bell hatched and the two of them started a chorus.  The one in the foreground is chick number two; Eager is in the upper right corner. 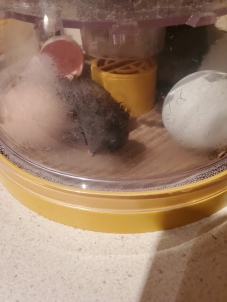 After they dried off for a few hours, we moved them from the incubator to the bathtub-cum-brooder. 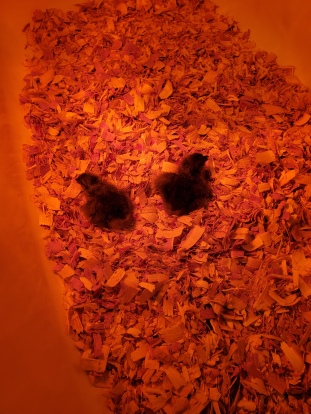 The third Blue Bell had made great progress by now but she was nice enough to wait until we got home from church so we could actually watch her break out of the egg.  Emmett was enthralled!  Ok, I’ll admit it – Oscar and I were, too.  I wish I could post the video I took of the hatching – I actually considered paying money to upgrade my WordPress account so I could post videos until I discovered the file was too big to transfer from my phone to my computer (roll eyes).

On the way to church, an off-hand comment was made about what this chick could be named if it was born during the impending thunderstorm.  Sure enough, the 9-year-old boy remembered that remark and, despite no thunderstorm, declared it’s name was Thunderbutt!

By now, we were finally seeing activity among the Cream Legbar eggs.  The first hatched shortly after 6:00 that evening.  I was really concerned though when I saw this emerge from the shell: 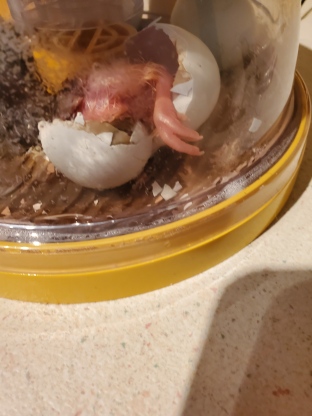 I was sure we were about to see a deformed chick; but no … 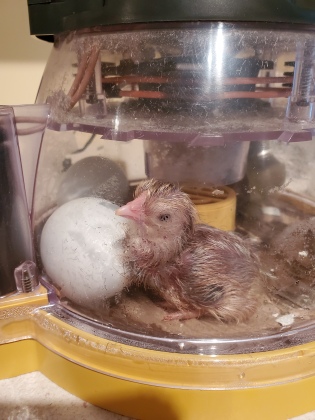 Big Foot was perfectly formed.  He just had humongous feet.  The Blue Belles had little stick legs with little stick feet so it was quite a contrast.

The next couple of Legbars hatched and were put in the brooder.  I told Emmett the last one would be named Caboose because it was at the end of the train.

Boy, did I come to regret that comment.  You see, Emmett is the Caboose of his family, so, after I said that, he had a bond with that unhatched chick.  Unfortunately, it didn’t hatch and it didn’t hatch.  It was pipped, it was zipped, but it was stalled.

I went to work Monday morning expecting it to hatch before I got home.  But no, it still hadn’t hatched.  The little thing was trying and you could hear it peeping but it was getting nowhere.  I looked closer and it appeared like the darn thing had somehow got turned around in the egg.  I had never heard of such a thing though so I hesitated to get involved.  I read on backyardchickens.com that you should give a hatching chick at least 24 hours to get out of the shell without “helping” it.  It was really close to that and he was still peeping so I let it be.

When I got up at 2:00 am to let the dog out, the peeping, though, had gotten very faint.  I could not let that thing die!  So, I hatched it.  I broke the shell away and sure enough, little Caboose was in the shell backward and would not have made it out by herself.  We watched her closely for a couple of days to see if there were any lasting effects from her ordeal but, other than being smaller than everyone else, she was fine.

So, out of seven eggs we had seven bouncing chicks!  Eager, Roadrunner, Thunderbutt, Big Foot, Dotty, Number Six, and Caboose.

My biggest take away from the experience?  It was fun – once – but there were lots of anxious moments, too.  So, from now on, I’m leaving the egg hatching to the professionals – other chickens!

← Lockdown! (of the chicken variety)
Knowing is not enough →
Join 55 other subscribers